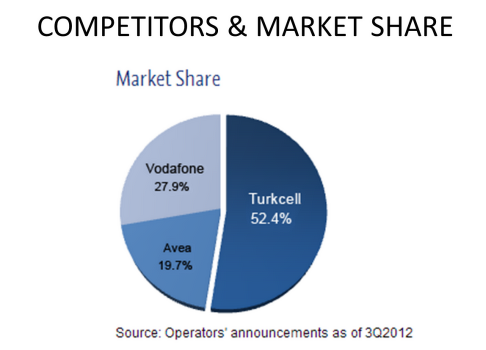 The Turkish population is young with an estimated average age of 30, which is lower than elsewhere in Western Europe, and the majority of the population lives in urban areas. In our opinion, these factors indicate growth potential for the mobile communications market in Turkey.  There are currently three mobile communications operators in Turkey: Turkcell, Vodafone, and Avea. As of September 30, 2012, the mobile line penetration rate in Turkey was approximately 90%, according to the operators' announcements and market estimates.  Turkcell operates under a 25-year GSM license, which we were granted in April 1998 upon payment of an upfront license fee of $500 million. Telsim also received a 25-year license with the $500 million upfront license fee in 1998. Telsim was seized by the Savings Deposit Insurance Fund ("SDIF") in February 2004 and it was put up for sale by the SDIF in August 2005, and an auction was held for Telsim on December 13, 2005 with Vodafone submitting the winning bid of $4.55 billion. The sale process was completed on May 24, 2006. In 2000, two new GSM 1800 licenses were issued. One of the licenses were awarded to Is-Tim, a company which began offering GSM services in March 2001 under Aria brand name was formed by Telecom Italia Mobile and Isbank, one of the largest private banks in Turkey. Is-Tim paid a license fee of $2.5 billion excluding taxes. The other GSM 1800 license was awarded to Turk Telekom. Turk Telekom began offering GSM services on December 14, 2001, through its brand Aycell. In February 2004, Is-Tim and Aycell merged to form "TT&TIM" which is owned by Turk Telekom (40%), Telekom Italia Mobile (40%) and Isbank (20%). TT&TIM operated under the brand name of Avea.  In November 2004, the Turkish Privatization Agency announced that 55% of Turk Telekom, which owns 40% of Avea's shares, would be privatized through a "block sale". The public auction for 55% of Turk Telekom was concluded on July 1, 2005. The winning bid was made by Oger Telecom's consortium comprised of Oger Telecom, Telecom Italia and BT Consult, for $6.55 billion, payable over 5 years and totaling $7.4 billion with interest. The sale of the 55% stake in Turk Telekom to Oger Telecom was completed on November 15, 2005. In the third quarter of 2006, one of the shareholders of Avea, Telecom Italia Mobile, announced that it will sell its 40% stake in Is-Tim to Turk Telekom and the sale was concluded in September 2006. ​

Source: Operators' announcements as of 3Q2012

Regulation of the Turkish Telecommunications Industry

The Telecommunications Law was reformed in 2000 and 2001. The reforms were aimed at modernizing and reforming the legal and institutional framework for the provision of telecommunications infrastructure and service in Turkey.

Retrieved from "https://tcll.fandom.com/wiki/Market_share?oldid=4047"
Community content is available under CC-BY-SA unless otherwise noted.